The funeral plans of late Nollywood actress, Ada Ameh have been announced by her family.

On August 19, there will be a novelty match in her honour at Nathaniel Idowu Pitch, Oregie, Lagos, as well as a candlelight procession at Teslim Balogun Stadium on same day.

While on Thursday August 25, there will be yet another candlelight service at Saint Mary’s Primary School, Ogobia, Benue State.

This would be followed by funeral service and internment at her father’s compound in Otukpo Local Government of Benue State.

Her Obituary poster has left her family, fans and colleagues in tears, as many left crying emojis under the announcement. 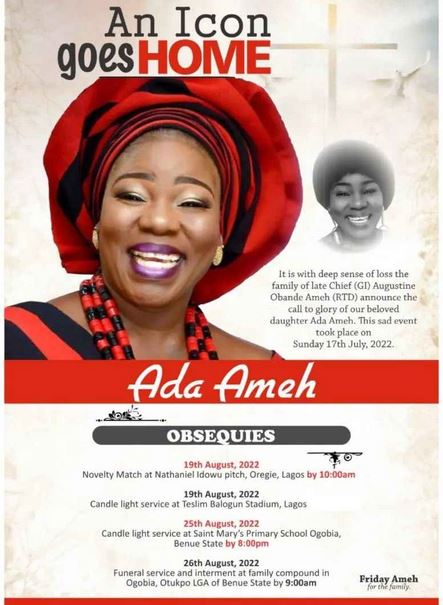 BBNaija: Relationship Not By Force – Ilebaye Clashes With Bryan (Video)

How Onje Sympathized With The Family Of Late Nollywood Actress, Ada Ameh

Video From The Funeral Of Actress Ada Ameh

I Miss My Dad, Wish I Called Him Everyday – Actress, Omoni Oboli Speaks

I Miss You, Why Did You Go? – Empress Njamah Mourns Late Actress, Ada Ameh (Video)