Ex-BBNaija housemate, Adekunle has taken to Twitter to lament after a fan requested for a photo, hugged him and stole his phone.

He said the phone which stolen around 2am at an event at Landmark Beach, has already been moved towards Arolaya, the gadget selling area of Lagos Island.

Adekunle reiterated that the phone which is being tracked is now useless to the thief as it has been placed on lost mode.

”Hi guys. So my phone got stolen around 2am at an event at Landmark Beach. A thief pretending to be a fan asked for pictures, hugged me, played a fast one on me and disappeared into the crowd. As at 6am this morning, the first known location of the phone was at Bamgbose Street.

Further probe showed that the phone was then moved towards Arolaya, the gadget selling area of Lagos Island. Currently, the phone is being tracked and on Lost Mode. Almost useless to the thief. It’s a black iPhone and my picture is the wallpaper

If you’re around Lagos Island, and/or you have any information about how to get the phone back or if you can help in anyway, it will be highly appreciated.” 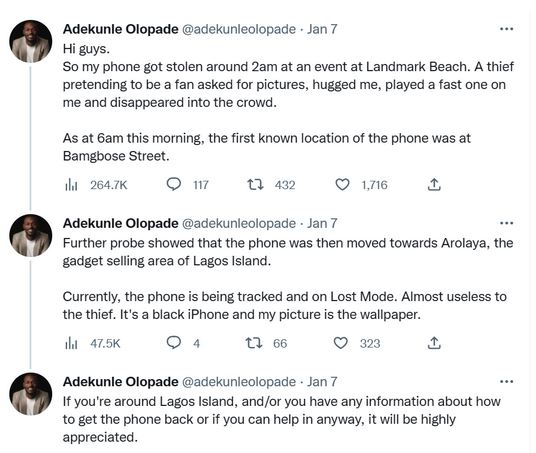 He Is Ugly And Does Not Have Money – Grace Makun Reveals What People Said About Her Husband, Yomi Casual When They Began Dating

Annie’s Love For Me Scares Me, She Shouldn’t Always Depend On Me To Be Happy – 2face Opens Up