I Wish My Marriage Lasted Enough, I Hope I Get A Forever Soon – Faith Morey Reacts To Joke Silva Dressing Up Her Husband, Olu Jacobs For His 80th Birthday Photoshoot

Model and actress, Faith Morey has reacted to an adorable video of Actress Joke Silva dressing up her husband, Olu Jacobs for his 80th birthday photoshoot.

Morey who noted that the couple has real love, further stated that growing old with the one you love is always a dream and she wished her marriage lasted enough.

Also pointing out that divorcees and mostly women are at the receiving end of a failed marriage, Faith Morey concluded by saying that no one gets into marriage while thinking of divorce. 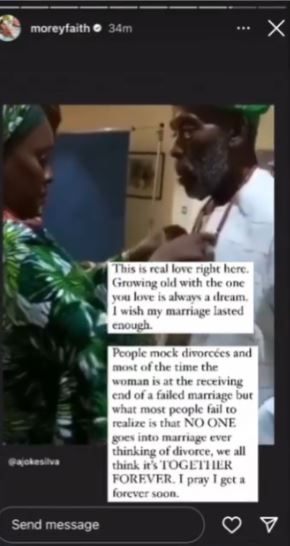 I Prefer To Show Love Than To M$ke Love – Rema

How I Handle S*xual Urge Without Being In Relationship – Actress, Bofie Itombra Speaks