I’m No Longer Affiliated With Chioma, Stop Associating Me With Thing Of The Past – Chioma’s Alleged Lover, King Carter Warns

King Carter, the alleged former boyfriend of Chioma has taken to his instasories to issue a warning to blogs.

He stated that he is no longer affiliated to the third babymama of Davido.

Carter in his post said people should “stop associating him with thing of the past”.

He added that he shouldn’t be addressed as an in-law. 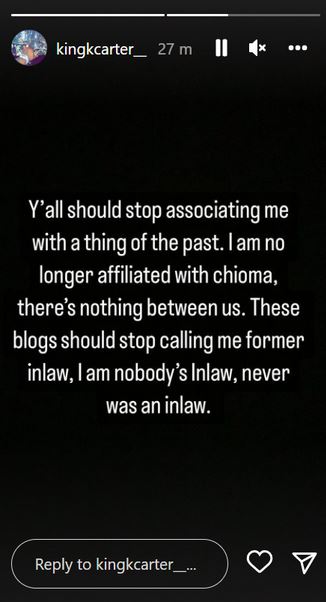 BBNaija: Chichi In Shock As Deji Packs His Bags

So You Can Talk – Singer, Davido Queries Chioma Over New Video