Ex-BBNaija housemate, Venita Akpofure has taken a swipe at model, Fancy Acholonu after she granted an interview to give details about her ex-fiance, Alex Ekubo.

Recall that Acholonu had accused Alex of refusing to get intimate with her in their 5 years of dating.

Reacting to Fancy’s account of what transpired, the actress questioned her motive. She further opined that it would be difficult for future partners to build trust with Fancy.

”This Girl sha…won’t be easy for future partners to build trust with you AT ALL. Almost every woman in this world has AT some point be deceived/betrayed/cheated on. It’s wrong but nobody died. There are no kids, property or legalities involved. What is actually your MOTIVE?.”

Venita also shared a rejoinder tweet following the backlash the previous one generated. She stated that there are women whose stories are yet to be told even though they are in worse situations.

”Abeg make una get out.There r women who have had all their teeth knocked out & are homeless with their children on the street.Some are lied to & contracted life diseases.So much pain n trauma. Is it because they are not with public figures?! Who is tellin their story?” 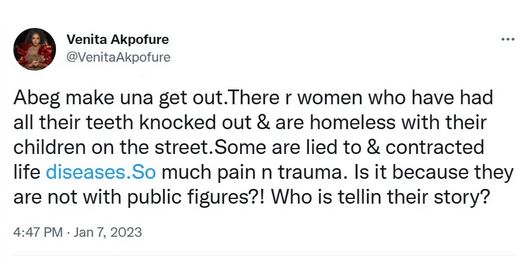 BBNaija: If Bella Is Having Issues With Anyone, Don’t Involve Yourself — Phyna Advises Sheggz (Video)