Sina Rambo has broken his silence after being accused of domestic violence by his wife, Korth Adeleke.

Korth had hinted at a marital conflict when she dragged Sina Rambo for alleged domestic abuse.

Korth detailed in a series of Instagram stories how she had been feeding and paying Sina Rambo’s bills.

She said that Adelekes’ riches is all a sham because she is their family’s breadwinner.

Sina Rambo has now released a statement through his lawyers denying the reports, which he claimed are incorrect.

He called the charges “baseless” and “lies with no shred of truth in them.”

Sina Rambo’s lawyer described him as an upstanding and respected member of society who appreciates family values.

Read the statement below: 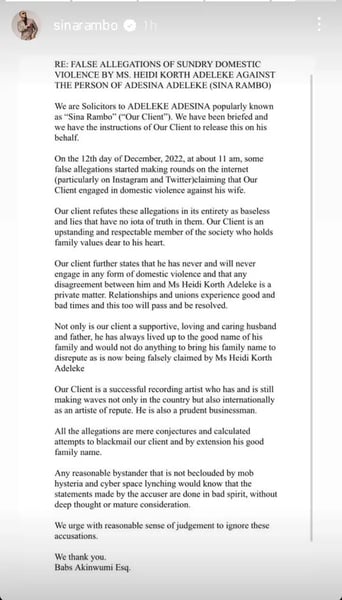 I Have Never Raised My Hands On Any Woman Including My Wife – Chacha Eke’s Estranged Husband, Austin Faani Breaks Silence

Burna Boy Reveals What To Expect On His Forthcoming Album

Simi Announces New Album, ‘To Be Honest’ – See Fun Facts About The Album