Nollywood actor, Yul Edochie has stated that his female colleagues and reality stars accused of having an affair with the General overseer of Omega Fire Ministries, Apostle Johnson Suleman should receive heat on social media.

Controversial blogger, Gistlover alleged that some actresses including Shan George, Queen Nwokoye, Georgina Onuoha and Vivian Metchie were romantically involved with the cleric.

Reacting to the allegation in an Instagram post on Thursday, he said that the actresses should face the backlash because he also received the same during his second wife saga.

Reacting to the allegation in an Instagram post on Thursday, Yul Edochie that the actresses should face the backlast because he also received same during his second wife saga.

The 40-year-old also stated he was dragged by his colleagues including Georgina Onuoha whose name was mentioned as one of Suleman’s alleged mistresses when he announced his marriage to his second wife Judy Austin.

“Na lie oo. No, be now e go end. Everybody go collect wotowoto. Anybody wey dem mention for Apostle Suleman matter make una drag am well well. Since we all want to be mad in this country. My own be say I even noticed that almost all the people mentioned have one thing in common. I’ll be back with that gist later.” 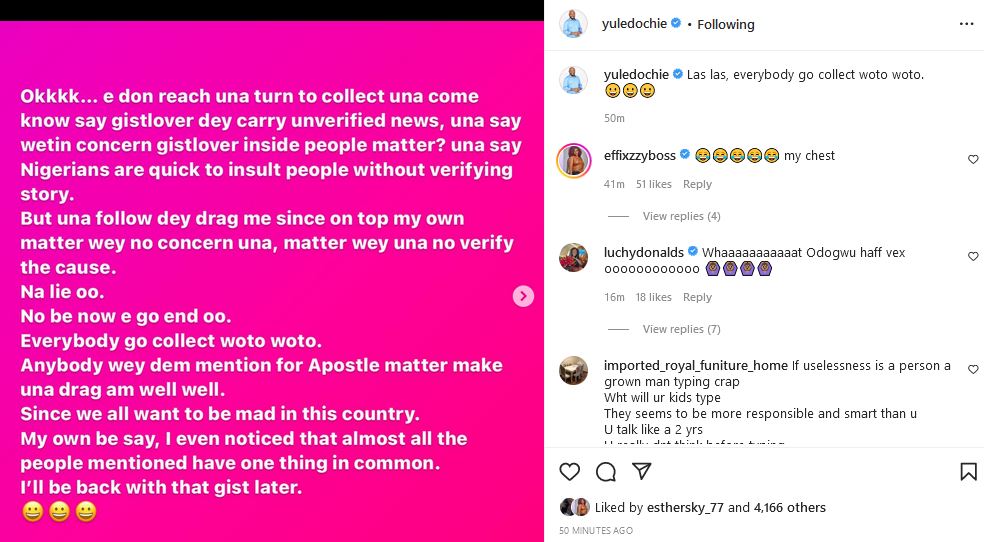 BBNaija’s Daniella Reveals What Attracted Her To Khalid