Yemi Alade, the highly celebrated Nigerian singer, has paid a visit to the Paris museum where Fela Anikulapo Kuti, the Afrobeat legend has been honored.

The award-winning songstress posted photos of herself with Fela’s portrait on colorful pants.

Last Thursday, the Paris Philharmonic paid homage to Fela Kuti by recreating the atmosphere of his sweaty, politically-charged nightclub in Nigeria, ‘The Shrine’, which became a beacon for global stars in the 1970s including Stevie Wonder and Paul McCartney.

At the exhibition, Fela’s son, Femi Kuti, spoke of his father’s courageous act of using his “music as a weapon”. 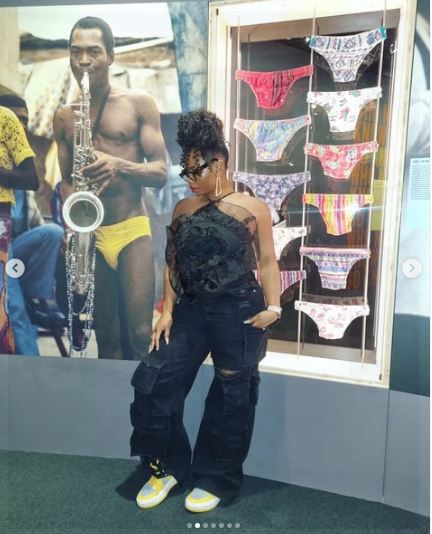 The Afrobeat Legend was distinguished by Yemi Alade as “an Icon”.

She encouraged individuals to live their lives on their terms adding that the world will eventually conform.

“Fela was an icon down to his panties! LIVE YOUR LIFE! THE WORLD WILL ADJUST!

“A few days ago at the #felaMuseum in #Paris,” the “Johnny” singer wrote.

Vote With Your Head, Sense And Full Chest – 2baba Tells Nigerians Ahead Of Election