Nigerian actor, Uche Maduagwu has taken a swipe at his colleagues for abandoning colleague, Ada Ameh when she needed help.

A gust of sad emotions had swept across the nation when news broke that the veteran actress, Ada Ameh had passed on.

The actress hadn’t been quite herself ever since her only child died on 20th October 2020.

Her colleague, Uche Maduagwu has called out Nollywood thespians who he claims abandoned her when she needed financial help.

According to him, they had all ignored her but were busy showing off the latest cars they had bought but now she’s dead, they’re posting and writing eulogies about her.

“Nollywood actresses why? I am so SAD now and in TEARS after seeing all the poetry written on social media especially by some popular actresses close to Aunty Ada, who IGNORED her when she came out on social media and needed help, these actresses never sent a KOBO, yet were all busy showing off expensive new #CARS and #Dollars constantly on social media, now Dem be the first to write poetry after the sad news, who do us like this for Nollywood?” 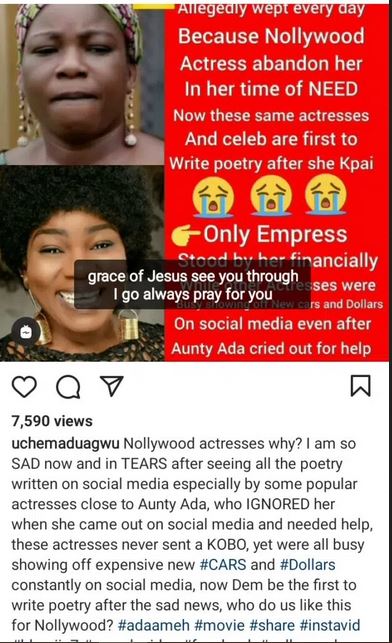 How Onje Sympathized With The Family Of Late Nollywood Actress, Ada Ameh

Video From The Funeral Of Actress Ada Ameh

I Miss You, Why Did You Go? – Empress Njamah Mourns Late Actress, Ada Ameh (Video)